The genus Papillifera Hartmann 1842 includes two species, P. papillaris (O. F. Müller 1774) and P. solida (Draparnaud 1805). Both originate from Italy; P. papillaris is widely distributed in the Mediterranean, P. solida has been found beyond Italy only in southern France (Provence). Both species differ mainly by the dark subsutural band of the shell, which is present in P. papillaris and in general absent in P. solida.
Though P. papillaris is known as a species since a long time, the knowledge of its intraspecific forms is poor. The wide distribution untypical for a clausiliid with its striking restriction to human settlements has not been explained so far. While 19th century malacologists had achieved at least a basic knowledge of the forms of this species (see part II), modern malacologists, except for an unnecessary dispute on the correct species name, supplied almost no further information on its diversity and its distribution (see part III).
The results of the author’s own research of P. papillaris in Italy and other Mediterranean countries are summarized in parts IV and V.
In all probability, the name Turbo bidens Linné 1758 is a senior synonym of Helix papillaris O. F. Müller 1774 (see Nordsieck 2013a). Though the morphological statements, on which Kadolsky’s neotype designation for T. bidens (a specimen of Cochlodina incisa Küster 1876) is based, are incorrect and the designation thus arguably invalid (for arguments see 2013a), the International Commission on Zoological Nomenclature (2015) thought it appropriate to decline the setting aside of that neotype. Therefore, the species must be named P. papillaris.

P. papillaris has been diagnosed and figured by Rossmässler (1836: 12, pl. 12, figs. 169-170) under the name Clausilia papillaris. Additionally to the type form he described a variety C. p. var. virgata „Jan“ from „Oberitalien“ (: 12, fig. 170) with the following diagnosis: „testa costulato-striata, peristomate continuo; palato calloso; cervice basi in cristam compressa“. This diagnosis, with the exception of „palato calloso“, corresponds with the definition of P. p. affinis (= virgata), which resulted from my own research (see part IV).
Philippi (1836: 139, pl. 23, fig. 30) separated Clausilia affinis from C. papillaris with the diagnosis „sutura concolore et striis elevatis sublamellaribus“. Later on, the same author (1844: 116) united C. affinis and C. p. var. virgata to his C. papillaris var. β, for which he repeated Rossmässler’s diagnosis of C. p. var. virgata. C. affinis has priority over C. p. var. virgata, because it was published in 1836 somewhat earlier, like other names of Philippi competing with those of Rossmässler.
Pfeiffer (1848: 453-454) listed the species as C. bidens, with var. β with C. affinis and C. p. var. virgata treated as synonyms. His diagnosis corresponds with that of Rossmässler for C. p. var. virgata, without paying attention to the difference of the cervical keel.
Küster (1850: 52-54, pl. 5, figs. 28-37) also used the name C. bidens, with var. A instead of var. β. In his diagnosis: „Costulata, palato calloso; peristomate continuo, soluto“ the difference of the keel is not mentioned, too.
Schmidt (1868: 107-108) treated C. papillaris and C. virgata with reservation as independent species, because he had received mixed samples of both (indication of a possible syntopy). He distinguished the latter by „den breiter umgeschlagenen oben durchweg lostretenden Mundsaum, die flachen Umgänge, die stärkere Streifung“. But he also mentioned „Mittelformen“, for example that from Toulon in France.
Paulucci (1878: 13-14) listed for the species named C. bidens the varieties var. circinata, var. virgata = affinis and var. brevissima. The var. circinata was characterized as follows (: 39): „très légèrement strié, … largement pourvue du bourrelet“; so she assumed for this variety an intermediate position between the type form and the var. virgata. C. b. var. brevissima L. Pfeiffer is a small form from S. E. Sicily distributed under this name by Benoit. Further, she (: 39) described two ribbed species of the group from Calabria, C. transitans and C. deburghiae. With the latter, which is a form of P. solida, she wrongly united, in accordance with O. Boettger (: 14), the ribbed variety of P. papillaris, C. tinei Westerlund, from Sicily (see Nordsieck 2013b).
Boettger (1878: 51) subdivided the species, which he, too, named C. bidens, into three subspecies: subsp. bidens (among others with var. circinata), subsp. virgata (among others with var. affinis and the ribbed vars. transitans and deburghiae + tinei, in accordance with Paulucci) and subsp. brevissima. Furthermore, he gave accurate information on the range of the species. A widely ribbed form from Sicily was described by him as an independent species, C. rudicosta.
Westerlund (1901: 137-138) treated Boettger’s subspecies, as well as the ribbed forms of P. papillaris, as species and gave a list of all their varieties described so far.

By their work 19th  century malacologists provided a foundation for the subdivision of P. papillaris, on which modern researchers could have based their work. But this did not happen. In the following papers of 20th century no attempt was made to work out a subdivision of  P. papillaris, which reflects its actual diversity.
Forcart (1965: 122-123), after examination of the samples of P. papillaris available for him from southern Italy, stated: P. papillaris „ist ausserordentlich variabel. Zahlreiche Populationen weisen Schaleneigenheiten auf und wurden mit besonderen Namen belegt. Vermutlich beziehen sich die von Westerlund (1901: 137-138) unter den Namen … angeführten Formen auf Populationen oder auch individuelle Varianten von P. papillaris„.
Alzona (1971: 94-95) listed all varieties which, as far as he knew, had been described from Italy, as subspecies of P. bidens and P. affinis without review. In a footnote one of the editors of his paper (: 94, as I assume, Toffoletto) stated: P. affinis „non è probabilmente altro che un insieme di popolazioni, con nicchio robusto, ispessito, e costulatura talora molto evidente, del ciclo variabilissimo di P. bidens, …“
Giusti (1973: 240-246) regarded all taxa described so far as synonyms of P. papillaris, which he did not divide into subspecies with the following explanation (: 245): „ho potuto constatare come alcune „specie“ altro non fossero che forme di passaggio tra una forma e l’altra o tra una forma e le semplice P. papillaris (Müller)“. „Ho potuto … constatare … la variabilità delle popolazioni ed il loro mutare in rapporto alla esposizione, alla freschezza o aridità del biotopo“. And concerning the forms from Sicily and Calabria the following (: 246): „Si tratta indiscutibilmente di demi locali, casualmente distribuiti ed inframezzati da altri demi a loro volta più o meno differenziati, certamente in rapporto solo con determinati fattori ambientali“.  Neither the intermediate forms were specified, nor the assertion that the differing forms from Sicily and Calabria were simple modifications has been founded. On the other hand, Giusti (: 237, fig. 28 A, C ) was the first, who gave an accurate figure of the genital organs of the species (from Isola Salina).
Manganelli et al. (1995: 25) in the Checklist delle specie della fauna italiana listed P. papillaris without subspecies, with the addition (= affinis = circinata = transitans = virgata).
Giusti et al. (1995: 375-379, figs. 421-427) determined the species from the Maltese Islands as P. papillaris without assigning it to a subspecies and stated (: 379), that „the Maltese populations correspond to the typical morph“ (this is only based on the sculpture, see part IV). They repeated that C. p. var. virgata and C. affinis should be regarded as „local demes“. And: „However, some authors still refer to them as true subspecies, ignoring evidence to the contrary in the literature“. This „evidence“, however, cannot be found in the literature.
The statements of Giusti and co-workers on the intraspecific diversity of P. papillaris were not confirmed by my research (see part IV). 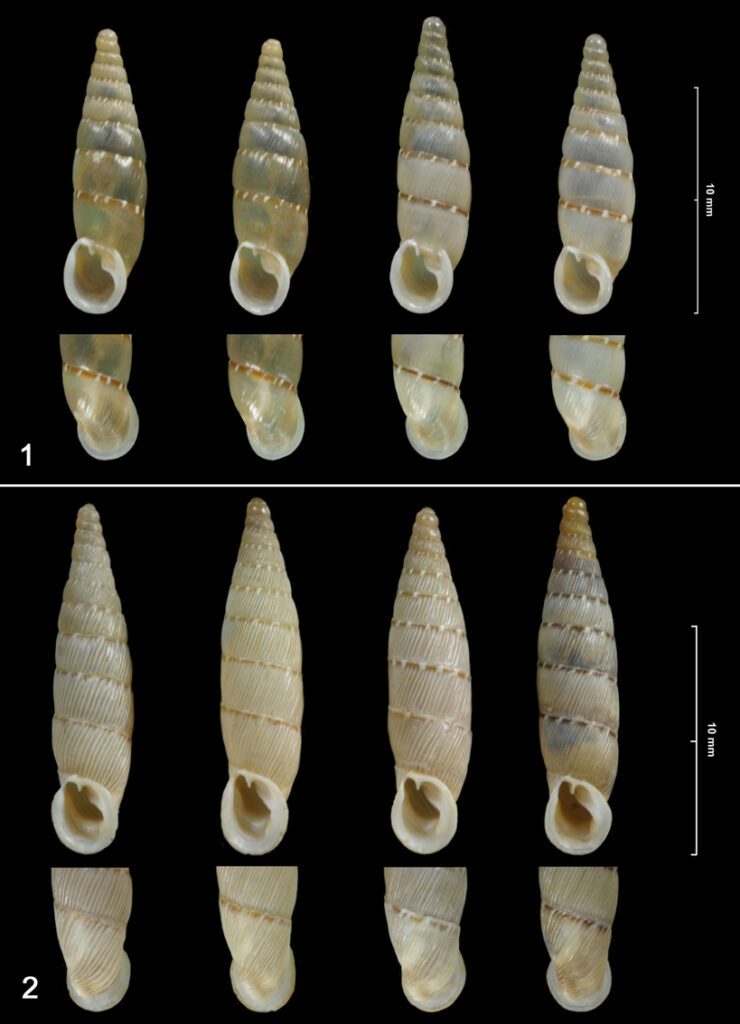 V. Distribution in other Mediterranean countries

Fig. 5. Map: Spreading of the two major subspecies of P. papillaris over the Mediterranean, reconstructed from the occurrences of both subspecies outside of Italy (see text). 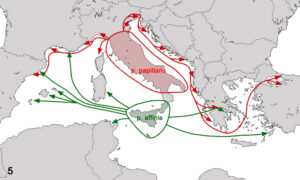 Nordsieck, H. (2013b): Delimini (Gastropoda, Pulmonata, Clausiliidae) from Apennine Italy, with the description of three new subspecies from Calabria. – Conchylia, 44 (1-2): 3-14.