Revisory remarks on the species of Siciliaria from N. W. Sicily

A. Schmidt (1868: 40-43) was the first who proposed a systematic arrangement of the seven Clausilia species from N. W. Sicily known so far. He classified the species with two groups („Formenkreise“) which mainly differ by the formation of the clausilium plate. Other characters which he regarded as important were sculpture, development of lamellae (inserta, inferior lamella) and palatal plicae. His system was the following:
Formenkreis of septemplicata: Clausilia grohmanniana Rossmässler, C. septemplicata  Philippi, C. calcarae Philippi, C. confinata = scarificata L. Pfeiffer, C. tiberii A. Schmidt;
Formenkreis of crassicostata: C. crassicostata L. Pfeiffer, C. nobilis L. Pfeiffer.
O. Boettger (1877: 33-34) named the groups of Schmidt (F. of septemplicata = Siciliaria Vest sensu stricto, F. of crassicostata = Trinacria O. Boettger). Later on, he (1879: 85-91) gave descriptions of several species taxa and listed eight species (C. leucophryne L. Pfeiffer added to those of Schmidt). His distribution data were in part based on wrong localities on the labels from Benoit and others.
Benoit (1882: 101-120) who had distributed most of the material in the collections of his correspondents listed 13 species, several of them regarded as varieties or synonyms by Boettger. Like those of Boettger, his distribution data were partially wrong.
Westerlund (1892: 47-48) published three of the numerous taxa names of Monterosato and gave a determination key for the species.
A. J. Wagner (1913, 1925) figured the genital organs of three Siciliaria species from N. W. Sicily (S. septemplicata: 1913: pl. 572, fig. 14; S. grohmanniana: 1925: pl. 1, fig. 8, S. calcarae: pl. 3, fig. 25). He (1924: 123-125) gave a list of the species which is nearly identical with that of Boettger.
Brandt, after his collection trip in Sicily in 1949, prepared a manuscript with the description of 24 new taxa based on „species“ of Monterosato or collected by himself. This manuscript remained unpublished; later on, only five of the species taxa were regarded by Brandt (1961: 6-9) as different enough to be described as new (among them two species: S. ferrox, with figure of genitalia fig. 1, S. alcamoensis). Besides, he (: 8) united S. leucophryne and S. tiberii (and S. eminens which later on was recognized as species) to one species under the name S. leucophryne, with which he also affiliated the newly described S. riberothi as subspecies. Many localities given by him cannot be identified or are obviously wrong.
Alzona (1971: 90-92) listed the same species as Boettger. Brandt’s new taxa were not considered, although his paper was cited.
Nordsieck (1979: 259-260) listed also the same species as Boettger and (: 269) united his species groups (Siciliaria s. str., Trinacria (preoccupied) = Sicania Tomlin). Later on, he (1984: 202) described the new species S. spezialensis based on material collected by K. L. Pfeiffer.
Manganelli et al. (1995: 25, 47-48), in the checklist of Italian pulmonate gastropods, enumerated 10 species taxa, proposed as such by Nordsieck (in litteris, S. ferrox and S. spezialensis added to those of Nordsieck 1979). At the same time, Giusti et al. (1995: 327-330) evaded a distinction of species within the group which they gave the oldest name S. septemplicata. Therefore, they determined S. calcarae from Quaternary deposits of Malta as S. cf. septemplicata.
Nordsieck (2002: 30, 34) recognized C. leucophryna and C. eminens as different species. He (29, 34) listed 12 species of Charpentieria (Siciliaria) and classified them with three species groups, based on some shell characters regarded as informative: 1 nobilis–calcarae group, 1a nobilis subgroup (C. nobilis, C. spezialensis, C. crassicostata, C. eminens), 1b calcarae subgroup (C. calcarae, C. tiberii, C. leucophryna), 2 grohmanniana group (C. grohmanniana, C. septemplicata, C. scarificata). Because of their ambiguous character combinations, C. ferrox and C. riberothi were not included in one of these groups. Several forms assumed to have originated by interspecies hybridization (: 34) were added.
Beckmann (2004: 188, maps 1 and 2) published detailed informations on the distribution of the species and described (: 188-190) two new subspecies, both assumed to be hybrid forms.
Reitano et al. (2007: 326-328) gave further informations on the distribution of S. ferrox.
Liberto et al. (2015) published a detailed description of S. scarificata.
Liberto et al. (2016) gave further informations on morphology and distribution of  S. calcarae and (: 371) described a new subspecies of that species, S. c. orlandoi.
De Mattia et al. (2021) published a comprehensive study of the Siciliaria species from the region under consideration, with focus on the genital morphology, together with a DNA analysis. This paper is based only on the material collected by De Mattia and Macor; the material which has been treated in this article has not been considered by the authors

The material on which the following system is based comprises about 230 samples of Siciliaria (S.) species from the collection of the Forschungsinstitut Senckenberg (abbreviation: SMF), containing the types of several species taxa, and 80 samples of my own collection, deposited in the Staatliches Museum für Naturkunde Stuttgart (abbreviation: SMNS) and the Forschungsinstitut Senckenberg. In the Senckenberg collection material collected by Kobelt, K. L. Pfeiffer, Brandt and Beckmann is kept, in my own collection an important part of the Brandt collection (SMNS) and material collected by C. and J. Hemmen in 2009 (SMF). 80 samples of all taxa have been subjected to a more thorough morphological examination.
In collections from the nineteenth century the localities given on the labels have often turned out to be wrong. In this article only locality data given by collectors, who in my opinion are reliable, are used. In any case, I had to rely on those data, because until now I had not the opportunity to collect in this region.
The examination of the genital morphology of several Siciliaria species (see website article on Genital studies) had the result that the genitalia of all species are similar.

In the following the diagnoses of the species of Siciliaria from N. W. Sicily and their distribution, as far as known from the examined material, are given. In notes, geographic forms which could have subspecific rank are characterized. Among them, there are several forms which have probably originated by interspecies hybridization (see chapter 2.).
The following shell characters have turned out to be informative for species diagnoses (see figs. 1-7):
1. Decollation: Shell entire / decollated.
2. Sculpture: Whorls rib-striated, with sutural papillae / weakly ribbed, papillae still recognizable / strongly ribbed.
3. Cervix of body whorl: Only with basal keel, without dorsal keel / with more or less pronounced dorsal keel.
4. Inferior lamella: Lamella more or less protruding into the lumen of the body whorl, described as: lamella high / moderately high / low.
5. Anterior upper palatal plica: Only one plica present / two plicae present, upper and lower one / plica missing.
6. Clausilium plate: Palatal edge of plate distally receding, thus distal part narrowed, forming a gutter (figs. 1-2) / not receding, palatal and columellar edges of plate nearly parallel (figs. 3-7). Palatal edge distally much bent up (figs. 3-4) / bent up (figs. 1-2) / somewhat or not bent up (figs. 5-7).
The distribution of the species concerned is restricted to N. W. Sicily: Egadi islands, Sicilian mainland from Trapani in the west to the western boundary of Madonie in the east, in the south delimited by the imaginary line Trapani–Calatafimi–San Cipirello–Ficuzza–Monte San Calogero.
In a larger part of N. W. Sicily two species pairs with identical clausilium plate, but different appearance (shell entire, nearly smooth and papillate / shell decollated, ribbed) occur (figs. 1-4). The smooth papillate species is adapted to more shady habitats, while the ribbed one lives in more open rock habitats. Decollation is possibly an adaptation to a life under stones. One of these species pairs, S. septemplicata / S. grohmanniana (figs. 1-2), is distributed in the east, the other one, S. calcarae / S. tiberii (figs. 3-4), in a larger part of the region, S. calcarae in the whole region, S. tiberii only in the central and eastern part. The range restriction of the latter is probably caused by the occurrence of other rock-dwelling species, those of Sicania, in the west.
On the San Vito peninsula, there is a species pair of Sicania, which lives in open rock habitats, S. nobilis / S. spezialensis. Both are adapted to this habitat by a well-developed white surface layer of the shell (fig. 5), looking like Albinaria species, both are decollated. S. spezialensis exhibits a special closing apparatus (clausilium plate fit into a frame of palatal plicae, anterior palatal plicae missing), which may better protect it from desiccation. On one mountain of this peninsula, Monte Cofano, a species with percostate shell, S. crassicostata (fig. 6), occurs. This sculpture, which is found also in certain Albinaria species and other rock-dwelling clausiliids of meridional Europe, may be another adaptation to a life in open rock habitats.
The occurrences of Siciliaria species on the Egadi islands are of special interest. On Marettimo, only S. scarificata occurs. On Favignana, originally only S. calcarae occurred. S. crassicostata, which has been collected by several authors on the island (e. g., by Brandt on garden walls, fig. 6) has obviously been introduced (by man?) from Monte Cofano nearby. 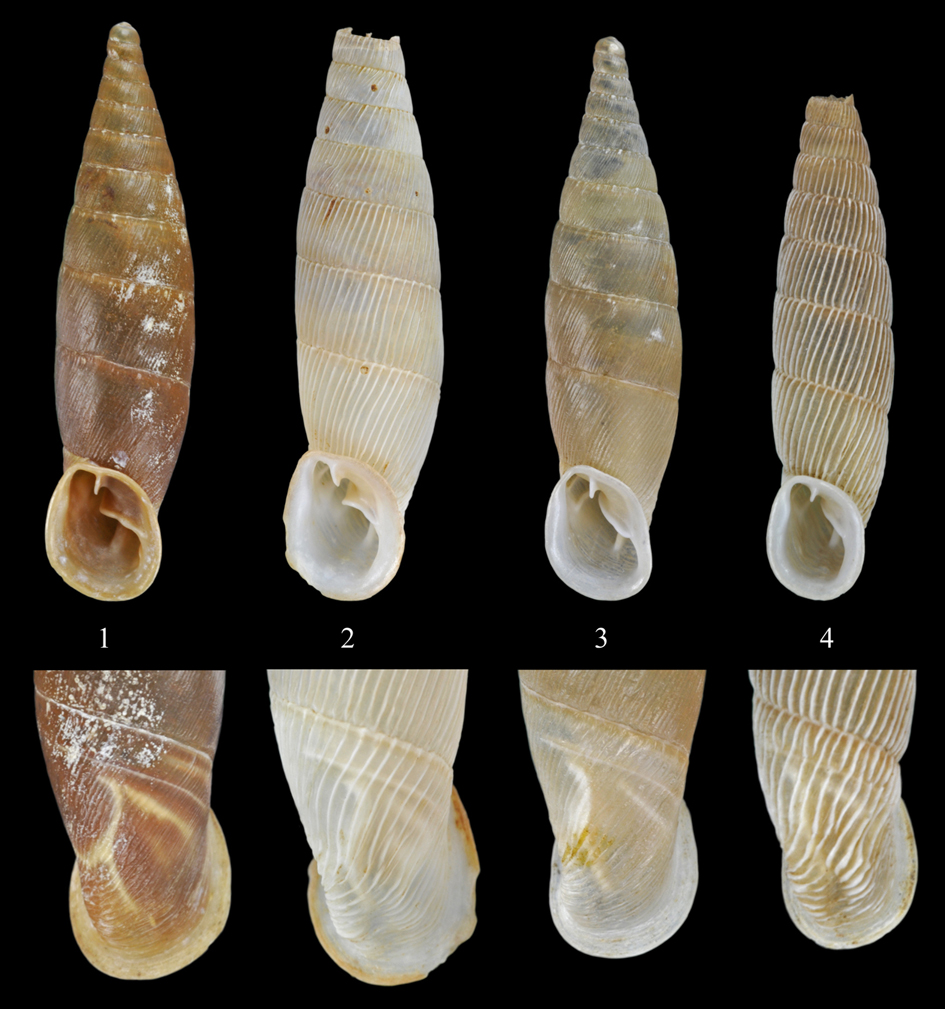 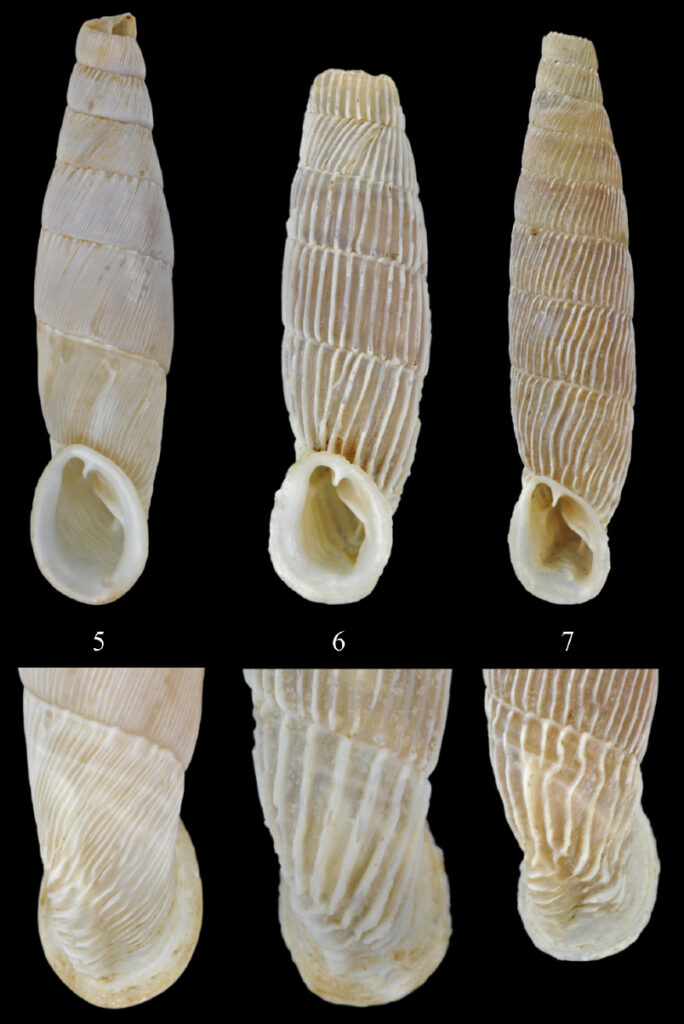 For the subdivision of Siciliaria from N. W. Sicily see website art. on DNA studies.

Distribution: From Cinisi in the west and Monte Gallo in the north to Piana degli Albanesi in the south and Monte Catalfano in the east.

Distribution: Island of Favignana, whole mainland of N. W. Sicily from Erice in the west to Montagna Grande in the east; in the south to Calatafimi and Ficuzza region.

Distribution: From north of Cinisi in the north to San Cipirello in the south, Monte San Calogero?

Synonyms: C. confinata var. commeata Westerlund 1892 could be an older synonym, but the description is too poor (lower anterior upper palatal plica not mentioned) and types are not available (Reitano et al. 2007: 328).

Distribution: From Custonaci in the west to Castellammare in the east, environs of Calatafimi, M. Bonifato near Alcamo.

The forms of Siciliaria, which are possibly hybrid ones, are enumerated in the following. They are forms of well-defined species restricted to certain localities or regions differing from the nominotypical forms by showing characters of another species. This other species is clearly different from that species and is distributed in the same region. The possible hybrid forms occur in the neighbourhood of or are even surrounded by populations of the nominotypical form of the species to which they belong. They could be the products of gene flow from the other species restricted to a limited locality or region.
These forms are the following:
1. S. grohmanniana addaurae (fig. 8), with characters of S. septemplicata, occurring in the environs of Palermo, where both species are distributed.
2. S. septemplicata, Parco form, with characters of S. calcarae, from a locality near Palermo in a region, where both species have been traced in localities nearby.
3. S. septemplicata alcamoensis (fig. 9) = S. s. hemmeni, with characters of S. tiberii, the latter occurring near Cinisi in a region, where both species are distributed. The locality Alcamo for S. s. alcamoensis is probably wrong, also because neither S. septemplicata nor S. tiberii have been found in that region.
4. S. calcarae belliemii from Monte Belliemi, with the ribbing of S. tiberii, which occurs in the Monte della Fiera nearby.
5. S. t. tiberii, type form from Monte della Scala (fig. 10), with characters of S. calcarae, occurring nearby.
6. S. leucophryna, Sferracavallo form, with characters of S. calcarae, from Sferracavallo where both species have been found.
7. S. eminens with widely ribbed shell from near Monte Cofano, transitional to S. crassicostata, occurring nearby.

The taxon which has been described by Brandt (1961: 8) as S. leucophryne riberothi is a special problem within the systematics of Siciliaria (S.). The locality of the type form „valley north of Ribera“ given by Monterosato, who provided it as Clausilia riberothi, is obviously wrong. The species cannot be found in the environs of Ribera (Agrigento province) (Beckmann 2004: 188); besides, this locality is outside the range of Siciliaria (S.). Another form (fig. 7), also coming from Monterosato and named C. remota (this name, however, has been used by him also for the northern form of S. tiberii, Brandt 1961: 8), is said to come from the mountains „della Terrazza“ (two samples, already mentioned by Beckmann: 188). This locality could not be traced until now.
S. riberothi differs from S. leucophryna by the prominent dorsal keel, which is like that of the northern form of S. tiberii, and from both by the clausilium plate (fig. 7). In all probability, it belongs to S. tiberii to the northern form (see above). 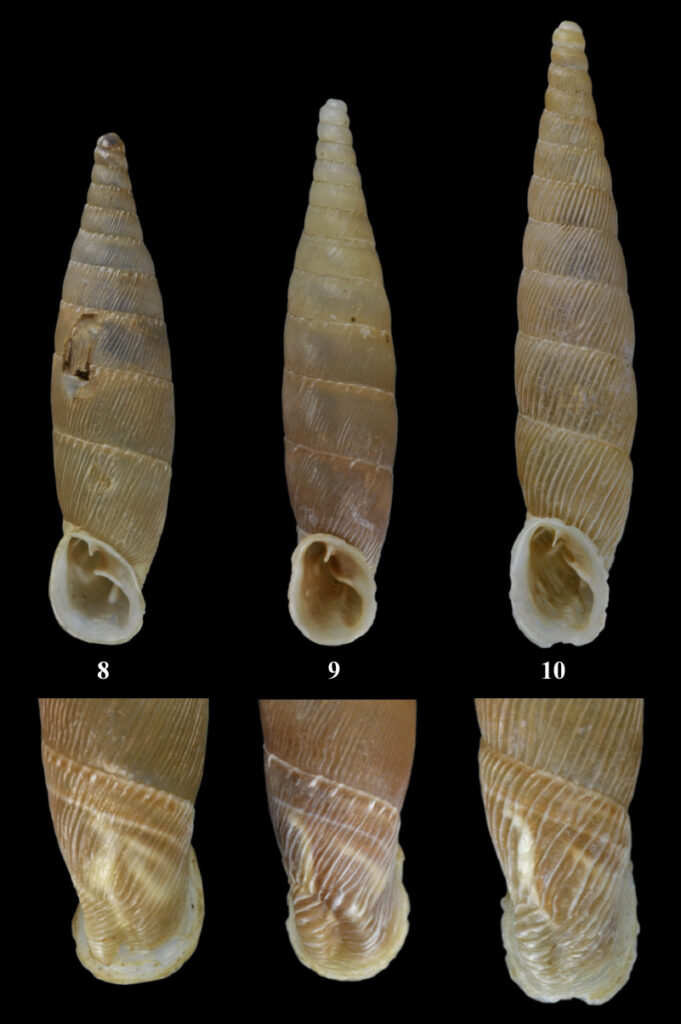